And with that, another field season in the books! And it wouldn’t be a Texas trip if we didn’t end it on the hottest and most humid day of the week! Today’s high was a mild 103 degrees with a heat index that reached 112 degrees right around noon. Thankfully, we did have some cloud cover today that made the temperature a little more bearable but we knew that we had to hit the ground running this morning before it got too warm. Fortunately, for a team like ours, this was no problem. 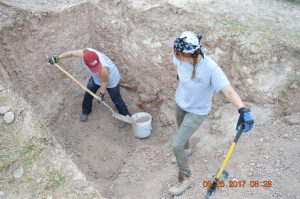 The beginning of the day involved moving a lot of dirt. A LOT of dirt. We had at least a couple of feet of hard, rocky clay to remove in order to uncover and remove the last burial in the area. Additionally, we had to remove a lot of the extra loose dirt around the burial so that it wouldn’t all just fall back on top and recover it. In our normal, and now very practiced fashion, we were able to efficiently complete this arduous task by utilizing our rotation system so that no one was getting to wiped out early on in the day. By 10:30 am, we had uncovered the final burial in area 2 of the Rio Grande Cemetery. 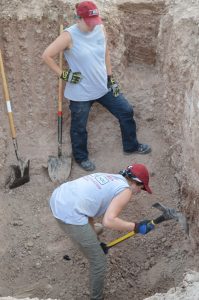 By this point, our pit had taken on quite a weird shape. In order to get in and out we had to create a large step in the back of the pit for us to climb up and down. This made removing the remains quite an interesting task. We all got together to come up with a plan for how we were going to go about this. Because of our preparedness, and critical and creative thinking, however, we were able to remove the remains from the pit very smoothly, completing the fifth and last burial in our area.

In order to be thorough, however, it was decided that we should dig a trench in the back wall of our pit in order to ensure that there were no other burials in this area. This was no small task, as the back wall was approximately 5-6 feet high.

We decided to rebuild our ramp (more like a slide) and start the trench with the step we had built into the back wall. We resumed our rotation system and each took turns using the mattock (see: awesome pickaxe tool) to dig our trench. After digging to almost six feet again in the heat we felt confident that there were no other burials in this area. And with that, area 2 was closed!

We finished off the day cheers-ing our Mexican cokes and ate our lunch in the air conditioned hotel. Tonight, we will be heading down the road to join our Texas State comrades for a pool party at their hotel! It’s been another great trip here in Texas, and it will be bittersweet to be leaving tomorrow. But I know that all of us are proud of what we have accomplished these last ten days and I am excited to see what the future holds in South Texas. Hasta luego! 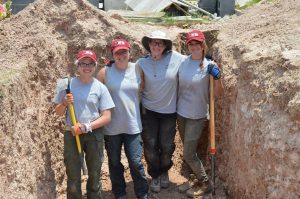 STAY TUNED FOR MORE POSTS OVER THE NEXT WEEK!