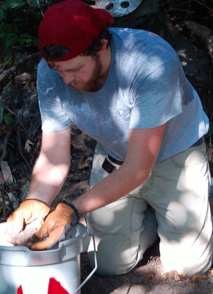 Why is this humanitarian work important to you?

Growing up in rural Texas, I was very much aware of the movement of peoples from Central and South America along the highway 183 corridor. The news frequently reported incidences of coyojate busts just a few dozen miles from my home town. In fact, a number of the people I went to grade school with either were in central Texas as the product of coyojate (a colloquial term referring to the smuggling of people across the U.S.-Mexico border) or had close relatives who were. It was not until I attended Texas State University, however, that I realized the scope of this practice and the true struggles facing the people involved in terms of the turbulent environment forcing them to leave their homes and the inherent dangers involved in coyojate. During my time at Texas State I became involved with Operation Identification, assisting in the processing of remains of unidentified border crossers and bringing awareness to the subject by helping to organize a forensic anthropology conference focusing on the issue. These sobering experiences opened my eyes to the magnitude of the border crisis and have inspired me to continue my involvement here at UINDY with the Beyond Borders team.

What do you hope to gain from this experience?

While I have been involved with Operation Identification in the past, by assisting more directly with the recovery of remains from south Texas I am hoping not only to gain field experience for my future career in forensic anthropology, but also a deeper understanding of the sociopolitics of the border crisis so that I can be a more effective advocate.

What are some of the biggest challenges you will face while in Texas?

Having lived in Texas for the majority of my life, I have to say there is not much that intimidates me about it in-and-of itself. I think that, for me having a history with the border crossing crisis, my biggest challenge will be in compartmentalizing the inherent emotions that are sure to arise.

What’s one thing people probably don’t know about you until they’ve known you a long time?

Honestly, I am an open book! Ask just about anyone who knows me and they will likely tell you they know more than they’d ever care to about me.

When did you know you wanted to pursue human biology as a degree, and how did you become interested in forensics?

I have been interested specifically in forensic anthropology since junior high and nearly everything I have done since then has been oriented towards that interest. I learned from great advisors early on in my academic career that knowledge of biology and general science is equally important if not more important in forensic anthropology as the anthropology which is why I completed a double major in biology and anthropology in my undergrad. It made perfect sense to continue this progression through the completion of a masters in human biology.

What advice would you give other students interested in pursuing a human biology degree at UIndy?

My biggest word of advice to those interested in pursuing human biology degrees at UIndy would be to just do it and push through it! While biology and human biology may not be the easiest majors to complete, they are entirely fulfilling and very versatile providing you with an incredible range of experience and knowledge which can be applied to many different fields.

UIndy couples the benefits of a small, private institution with the variety and scope of larger, public  institutions. The small size of the human biology program at UINDY allows a more hands on and interactive approach to human biology. This coupled with the range of specialties held by the faculty including classical histology, forensic anthropology, genetics, anatomy, etc. etc. provide a rich learning environment that is perfect for individuals with quite varied interests. I personally love UINDY’s human biology program for the opportunities provided both in field and lab forensic casework, humanitarian work such as this, teaching, and more!