Today was another early day, arriving at the cemetery at 6:30 am along with Texas State University. After arriving, our group wasted no time in unloading equipment and getting our day started by excavating a smaller area that was obstructed by trees and headstones.

Sammi and Leann started on a more complicated part of the smaller section that involved what appeared to be one burial with three small plastic markers. The markers were for two known burials and one ‘john doe’, obviously a situation that needed more investigating. As Sammi and Leann proceeded with excavating the first grave, it was quite the difference compared to the day before. The dirt in the area we had worked on the day before was comparable to 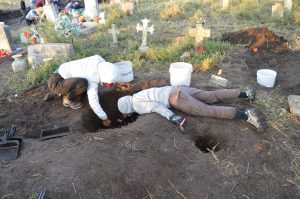 cement while the soil in the smaller, shaded area was softer making it more easily excavated, or so we thought. Turns out there were pockets of cement-like compacted soil that made it slightly more difficult but was still better than the day before. Sammi and Leann quickly found the known burials, which were located close to the surface, but noticed that just below them was an anomaly in the soil. What they found was the unknown burial located beneath these two known burials. If it were not for Leann and Sammi’s attention to detail, it is possible that the unknown burial could have been missed.

While Sammi and Leann were working diligently on their first excavation, Jordan and I started on a small area just north west from their location. Jordan was in “beast mode” and dug two feet while my back was turned… well, maybe not that quick but it sure did 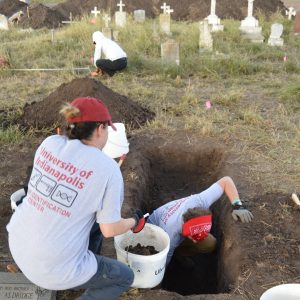 seem that way. In what seemed like no time at all, Jordan and I were able to uncover our first burial. After having Texas State digitally record the location with their RTK  (aka – magic stick) our team took measurements by hand, and then we were able to remove the unknown burial and back fill the area. The final depth measurement for our first excavation was 98 cm below the ground surface.

Before noon today, our group was able to remove all four unknown burials from the smaller area in our quadrant. After a delicious lunch we started in the larger area, Jordan and I teamed up again to work on an area that we originally had thought was one unknown burial. It didn’t take us long to realize that we actually had two unknown burials with Jordan’s burial extending underneath the wall. Jordan and I refocused our efforts on the area I was excavating and thank goodness because the soil surrounding the burial was hard like cement and I definitely needed Jordan’s assistance with breaking down the area around the burial.

At the end of the day, our group located a total of 9 burials and recovered 6 unknown burials (3 were known). Unfortunately, the area that we will be working in tomorrow appears more complicated than we originally had thought. On day 1, we were told that there were 5 unknown persons buried in the area that Joe and Louis had excavated. At the end of the day today, we have located a total of 7 areas of interest that need to be investigated further. The tradition of ‘expect the unexpected’ appears to be holding true again this field season. 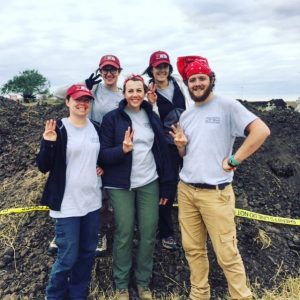