These first few days of working out in the field have certainly been eventful and have held true to our team’s mantra of “expect the unexpected.” Not an hour into our first day at the cemetery, I found myself holding a very expensive and fancy piece of equipment, a GPS with base station and rover, or as we call it “The Magic Stick.” I have heard of equipment such as this but have never seen it in action, nonetheless been able to operate it myself. I was simply inquiring about how the equipment worked when Dr. Nick Herman, a professor of anthropology at Texas State University, thrust it into my hands and set me out mapping the scene using the GPS technology. So quickly into our work here in Texas I was given such a great opportunity to work with a tool that I may have never otherwise gotten an opportunity to experience, and it felt pretty cool. 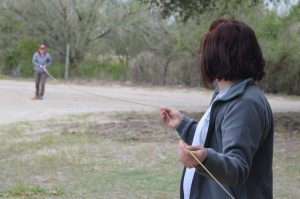 The next day, we broke ground and began the exhumation process (you can read more about it here). It was a day filled with excitement for many reasons. It was exciting to be a part of a team that worked so well together and adapted quickly to new and challenging situations. Additionally, the exhumation process itself was incredibly exciting and rewarding to be able to participate in. Another excitement factor, however, was somewhat expected but not quite to the degree to which we experienced it – the media. We were all told to be prepared for possible media presence at the cemetery but I don’t think any of us expected there to be such a significant amount of personnel following our every move. I know I certainly did not expect to be interacting with the media so closely myself. Through working on forensic cases back in Indianapolis, my instinct is to have tunnel vision when it comes to the media and so I tend to pretend that they aren’t even there. This was nearly impossible to do yesterday – they were everywhere and all around us, often getting very close into our personal space. I have to say, I was not always comfortable with the situation. Never did I feel pressured or unsafe, though some of the media personnel behaved better than others, but it was just something that I was not used to and did not expect. It was definitely a unique experience. 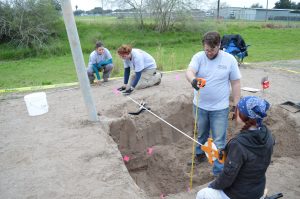 anticipated. We were out in the cemetery from sunup to sundown, just about 10 hours, and we were busy for all of it. Today was the day where I think we all fully realized the importance of being prepared for anything. The first half of the day went pretty much as we had planned, and we thought we had just about completed the excavation of our area. However, some of the officials who have been involved with this human rights work for some time assured us that there may be more work to be done before we move on to a different area. We attempted to probe the ground with steel T-probes to detect any disturbances or objects in the soil; what we 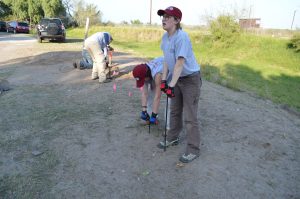 found was areas where the soil was so soft we could probe right through and other areas where we had to use our entire body weight just to move down a few inches at a time. We were not confident enough in these results to draw any major conclusions about whether there may be more remains in the area or not so we decided that the best way to proceed would be to dig a trench throughout the entire section in order to be sure. Unfortunately, at this point the sun was already setting and so we were going to have to resume this on our next day in the field.

I think all of us are feeling quite tired and sore tonight as we finish up our work at the hotel. Tomorrow, however, we have a break from the physical work in the field as we take a trip to volunteer at the Sacred Heart Respite Center. Though we will not be shoveling 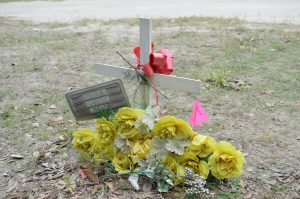 massive piles of dirt and moving buckets upon buckets of soil, we will be challenged both mentally and emotionally as we immerse ourselves even further in this crisis situation at the border. I am both nervous and excited for whatis to come tomorrow, and as much as I have been told about what our volunteer work will entail, after today I am reminded to expect the unexpected and to be prepared for anything.