Today we packed up the minivan and started our journey towards San Marcos.  We met with Sister Pam and two volunteers from Ohio on our way out of town and followed them to Karnes City. There we found the Karnes County Residential Center, a place where women and their children are detained while waiting for their court date to determine refugee status.  We thought we were going to see the center but were informed by Sister Pam that we would each be visiting a different family detained in the center.  She told us that we were used to working with the material objects, the burials and the bones.  That these items were predictable and in our comfort zone.  That working with the living was unpredictable and a necessary part of understanding this humanitarian crisis from all angles.  We all looked at each other and I could tell that my students were as terrified as I at that moment. Our Spanish was little to none. What could we possibly say or do for these families that were suffering so much?  But once Sister Pam makes a decision it’s final. We were going in.  This experience ended up being life changing for us all. I asked everyone to contribute to this post by reflecting on their experiences today.

Krista Latham: As we stood in the parking lot Sister Pam told us to leave everything in the car except our driver’s license.   No phone, no sunglasses, nothing.  She handed each of us a piece of paper with the name of a woman, her identification number and the names of the children. I was anxious as we entered the facility.  We stood in line and went to the receptionist.  We had to fill out paperwork requesting the visit and turn in our identification cards.  Then we were sent to the waiting room in the hope that our family was available and that they would let us in.  To be honest, in those minutes I hoped my family was not available. I was terrified.  I speak very little Spanish and kept thinking my family would wonder why this crazy women came to visit them. But eventually my name was called. I went through security in a similar fashion to what you would see at the airport.  Seventh door on the left and give this paperwork to the guard, I was told.  I walked slowly down the long hall getting more and more nervous with each step.  I entered the room and was told to sit at a table in the middle of the room. I saw Ryan already with his family and sat close to him for moral support.

A young woman wearing a Captain America shirt and an adorable little girl with curls entered and sat at the table.  I told her my name and that I was a visitor.  She immediately began speaking to me in Spanish. I explained my Spanish was not very good and she slowed her speech. She knew no English and I knew very little Spanish.  But very quickly I was able to understand that she was here from El Salvador.  She left with her two children and was here with her daughter. She believed her son was in Dallas.  She had been there for several months.  I told her about my son and where I lived.  After the introductions we both relaxed and began to joke and laugh together. She would speak to me quickly in Spanish and then shake her head and laugh. She knew I didn’t understand everything but was just happy to be talking to a visitor.  Her daughter played with the other children in the corner of the room where there were a few toys.  All the women laughed and joked with all of us in the room.  There were times when the guard looked visibly annoyed at all of our laughter. Before I knew it the guard was telling us that our hour was over and I had to leave.  We hugged and said our good byes.

We all met back in the waiting room and reflected on this experience.  We were happy to have spent an hour with these women and share a laugh with them during obviously stressful times.  We learned that these are very strong women that not only endured a life of violence in their home countries, a long journey with their young children from Central America to the US, but also detainment with restricted access to resources and little to no contact with family.  All to give their children a better life free of violence.   Something many of us take for granted. 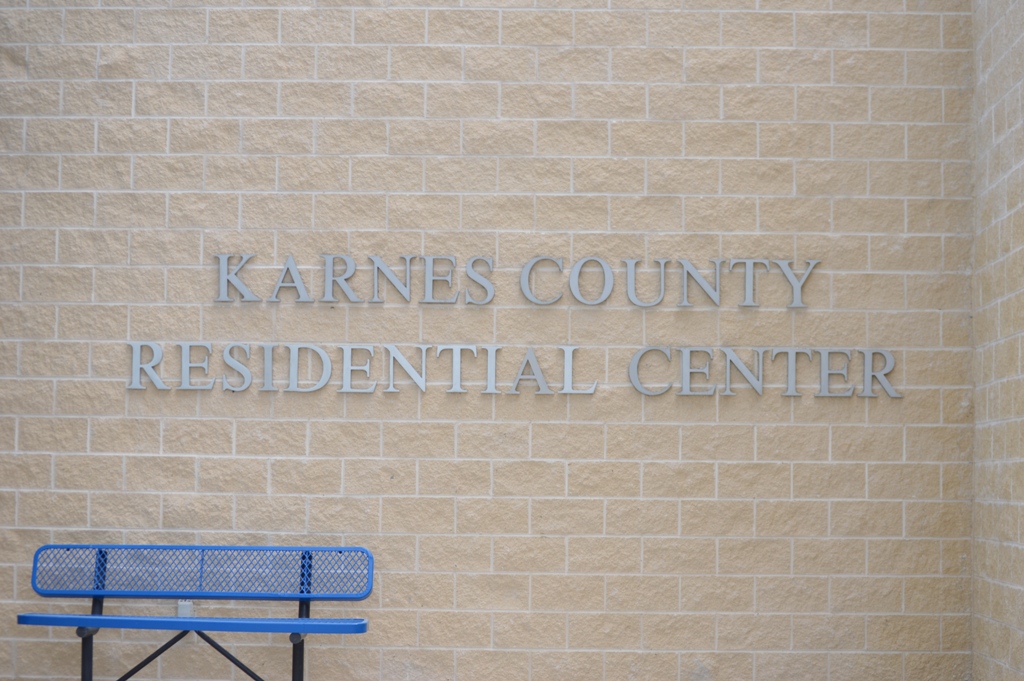 Ryan Strand:  I’m still thinking about today, and no matter what day you read this, that statement will hold true. I spent an hour with a young woman and her son at the Karnes City Detention Center, and we communicated in Spanish, English, very broken Spanish, very broken English, hand motions, finger-writing on the table, eye contact, facial expressions, and any other possible form of communication. We talked about our families, where we were from, where we were going, what sports we loved, and how bad my Spanish was. Although I learned so much with the little Spanish I knew, we spent the majority of our time smiling and laughing, both knowing that the time and effort spent trying to understand each other was more important than the actual communication.

I was extremely nervous walking into the visitation room. I figured the meeting would be awkward because I spoke very little Spanish and I knew little about the unbelievable situation the family was in. Without a common language or an honest understanding of the family’s situation, how was I supposed to find any common ground? Yet, naturally, it happened. We DID share a common language: a smile and laughter. Verbal communication wasn’t one bit necessary for the need of the moment. The three of us smiled and laughed until the guard made me leave an hour later.

We all agreed to write each other, and of course I promised my Spanish would be better in my letters with the help of a dictionary. The boy loved sports, especially soccer, and so I promised to send pictures of the soccer teams from Indianapolis. Once I move to Austin, I plan to visit the family as many times as possible, which I think can be as often as once a week. I’ve promised to help the family in any way I possibly can along their journey. Even if it becomes difficult, I know I can always rely on a smile and laughter. 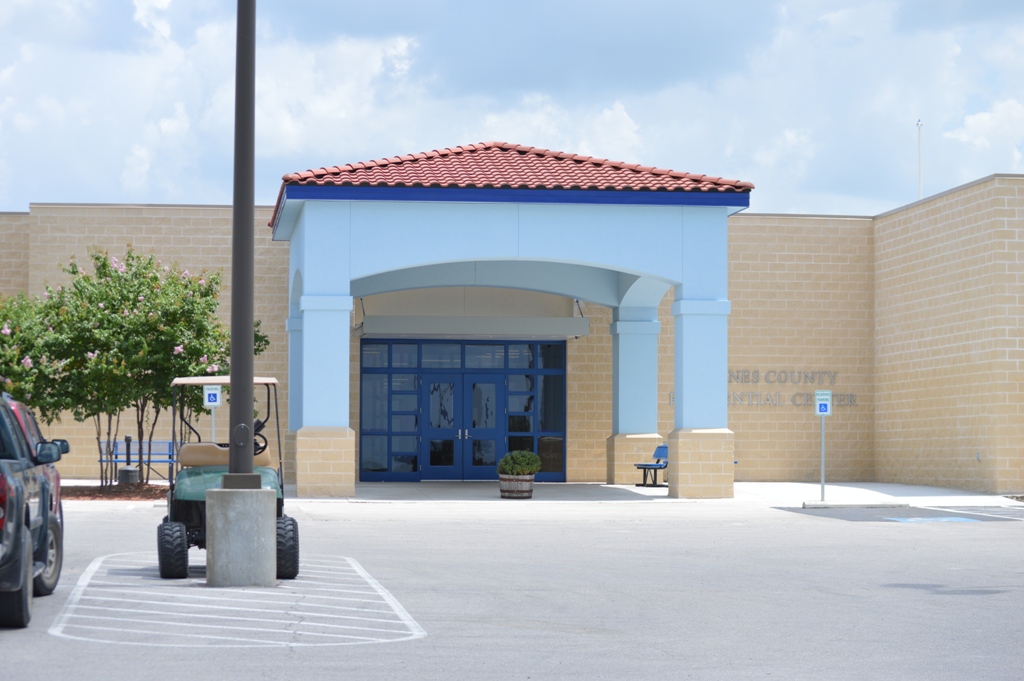 Justin Maiers:  I sat very quietly in the lobby of the Karnes facility. For those of you that know me, silence is not my strong suit. In my mind I practiced all of the remedial Spanish phrases I could muster. Part of me wanted to just to leave. It would be easier. Instead I sat reticent and fearful of what lied ahead. One by one the others entered the visiting room. My name was the last to be called.

I came through the door to find a mother who looked very tired and a small girl with glowing eyes and a beaming smile. They both gave me a hug as if it was the last or only hug they would ever give. We sat and talked as best we could, with our collective remedial Spanish. Their native language was not Spanish, but K’iche’. They had only learned Spanish 10 months earlier when she arrived at Karnes.

We talked a lot. Still, the most powerful aspects of our conversation were unspoken. Language is a funny thing. We don’t need to speak the same language to understand each other.  Words aren’t necessary to convey love, anger, or pain. Between the broken words and silences there was something tacit.

I was silly to have been afraid, as we talked that fear melted away. It’s funny to think that a four year old girl had more strength and courage than I may ever know. We hugged one last time before being escorted out of the visitation room. I walked back down the stoic white halls just as quietly as I came, this time with bolstered fortitude given to me by my new chiquita amiga and her brave mother. 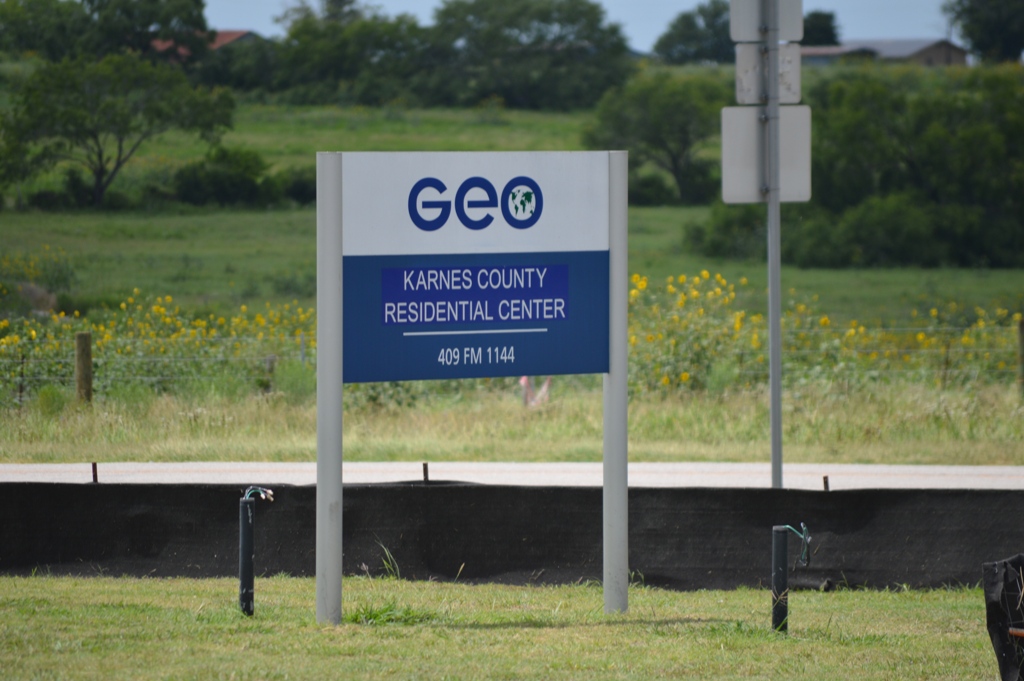 Amanda Khan:  The women I was assigned to visit at the Karnes County Residential Center had two adorable little girls. When the family walked into the visitation room they looked unbelievably exhausted, but the little girls perked up immediately when they saw the play area. They ran over to the toys with smiles lighting up their little faces. They suddenly transformed into kids again, laughing and playing with each other. All of their worries seemed to slip away in that moment.

The mother walked up to me and gave me a hug. I was a complete stranger to her, but she literally welcomed me with open arms. I was touched by her kindness. We sat down and tried talking, me with the little Spanish I knew and her with the little bit of English she knew. Together we were able to have a conversation, but she was so tired. You could see it in every movement she made and in every word that she spoke. There were lulls in the conversation when we both couldn’t think of anything to say. We watched her children play during these lulls and she seemed content to just watch her daughters have fun. At some points in the conversation she would just stop talking, take a breath, and rub her face in exhaustion.

My heart hurt for her. Here she was sitting in this purgatory of sorts. Her future unclear and her journey far from over. Yet, she had this unwavering strength and somehow managed to remain hopeful about the future. She left me with another hug and I wished her good luck.