In his 1967 book The Forest of Symbols, Victor Turner wrote a chapter titled “Betwixt and Between: The Liminal Period in Rites of Passage” (Turner 1967). Here, he describes a “liminal” period in which the subject of interest is in between different steps of their rite of passage, and are no longer held in the same regard as they were before their rite stated, but have not yet reached their post-rite status. While Turner was describing the Ndembu people in Zambia, I feel the idea of liminality can be aptly applied to the crisis at the border.

One could consider many stages of liminality in the physical and mental movement from one’s home country into the US, or any other county: in between their homeland and the border of the next, in between the border and their destination, in between their destination and freedom. This liminality is only compounded when an individual perishes in their in-between, which is what is happening here in Brooks County. Individuals are attempting to reach their destination, often with little or no contact to either their before (home) or after (destination). They are between, and their deaths force them into an added dimension of liminality: found or not found, identified or unidentified.  Thankfully, our work here in Falfurrias allows us to aid both the living as well as the deceased. 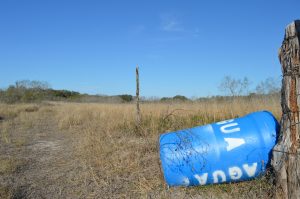 This morning, we met early at the STHRC, loaded up a prototype water station built by Trinity University students and faculty, water, and supplies and headed to a local ranch. We replaced a regular water station with the prototype, hoping that the additional water it is able to hold will be of aid to those walking along the power lines attempting to
reach the interstate. On this ranch, we met a foreman whom none of us had met before. He lead us to the water station and helped us build the prototype. After talking more with Eddie, he offered to take water and fill the rest of the water stations on the ranch.  I
downloaded an app on his phone that would give him fairly accurate GPS coordinates to
send on either to Eddie or in case of emergency. He told us about his experiences providing 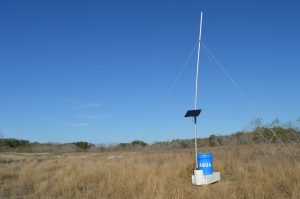 aid to those crossing through the ranch, and truly seemed interested in helping any way he could.

This is how our work is able to impact the living. Through Eddie’s guidance and with Deputy White and the foreman’s help, we got the prototype up and filled it with 14 gallons of water (most only hold 6). Aid in the form of water helps increase the chance of survival, and thus the movement from one phase to the next.

After we finished and made sure all of the electronic elements were set up, we continued on further into the ranch to conduct a line search. Deputy White had received 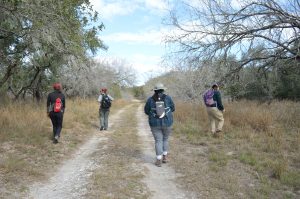 some coordinates of interest along a path, so we lined up as usual and did our search. We did not go far out into the brush, like yesterday, but mainly stayed on the path. This was largely due to the fact that the coordinates were right on the path, not off into the brush very far. We walked to and past the coordinates, then doubled back. We walked mostly in silence, our eyes trained on the shrubbery, looking for anything that our brains would perceive as bone before we did.

Our searches, as well as our exhumations, are what makes our work able to impact the dead. By locating those who have perished, we start them on their way to identification, and thus out of their between. It is important to note that none of this would be possible without Eddie and the STHRC, or without Deputy White. They are the ones who continue the work once we are back to our “normal lives”.

After our fieldwork was finished for the day, we drove to McAllen, TX to speak to students from Emory University (visiting from Atlanta, GA). We listened to Eddie talk about his work and the STHRC, then to Dr. Latham talk about the history of our team’s involvement at the border. The students and their professors asked thoughtful questions, We finished our day by eating a lot of tamales at Delia’s.

My hope is that our work continues to aid in the movement of individuals out of liminal phases, into something more definite. This applies both to those crossing the border, as well as those of us who are still figuring out what we are doing with our lives. I’m so thankful for this experience, and even though it’s my third trip, I learn something new everyday. 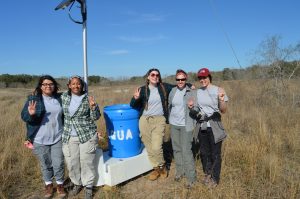