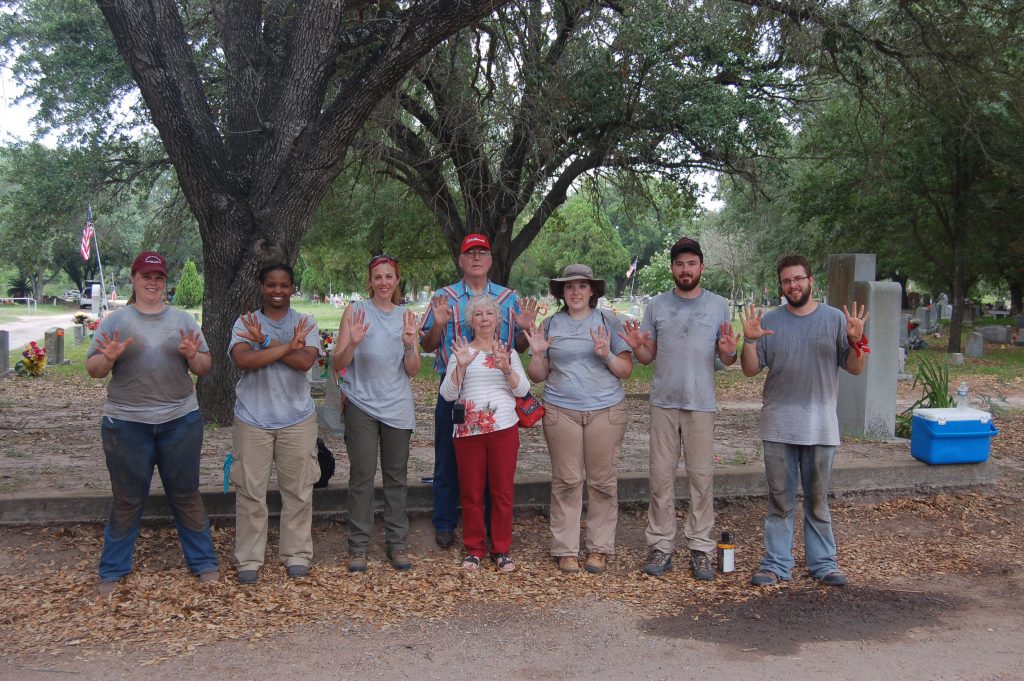 We had a lot going on today.  After arriving early on the site again to get a jump on the sun, we worked furiously.  After today, we only have one more day left to dig.  It hit us all hard, because we simply can’t leave this area incomplete.  We can’t leave any unidentified individuals behind.  We don’t know what will happen in next year’s excavations, if we are able to return.  We just have to finish the monumental task we set for ourselves this year.

Today we hit a dense area of our grid.  It was so compacted we had a hard time getting shovel or trowel through it.  It slowed us down quite a bit.  By the end of the day though, we made good progress, and were able to prep the area for more dirt removal tomorrow morning in the dark.

The heat and humidity really hurt us today however.  Even though it was overcast, it was misleading.  Ryan was the first to be put in time out to recuperate and rehydrate, but the sun is unforgiving.  Ryan will recover, but today the environment seemed to defeat us all.  A few other members of our team are feeling the burn as well, but with one day left, it is hard to stop work even at the expense our personal health.

We had a couple unexpected special guests today.  Erica’s grandparents (see our day 9 photo), who live in Corpus Christi, drove up to visit her and drop off homemade chocolate chip cookies.  They were delicious!  We were also greeted on return to the hotel with homemade Menudo that the Brooks County Sheriff’s Department put together for us.  Cheneta destroyed two bowls of this wonderful, flavorful traditional Mexican dish.

After a team rest, we headed out to Constable Arturo’s house again for dinner.  The generosity of this small town astounds me every day.  Everyone we meet is genuinely kind with welcoming hearts, and they are immensely grateful for whatever we can do to help them.  It is sometimes hard for us to comprehend.  We are immensely grateful for being invited to help in this humanitarian crisis in any capacity we can.  No matter how many words we write, we can’t adequately express how much it has impacted us personally and professionally.

Check out our work here: http://www.krgv.com/news/forensics-experts-work-to-identify-bodies-in-brooks-county/. Latham, Lathram or Indianapolis, Minneapolis…I guess the exact details aren’t too important to the reporter…but at least it brings more awareness to what is going on here.

The past couple days have been filled with frustrations and successes, making the highs and lows of a day so dramatic it is difficult to adapt emotionally.  We have three days left of excavations in the cemetery.  It seems like we just got started this year and already it is coming to a close.  It seems as if we never left last year.

Yesterday we completed our first quadrant.  This time last year we were on quadrant 3 or 4, and they were larger areas.  It is frustrating because we all feel we should be doing more, be more efficient, work harder, work longer, take less breaks, clear more area in far less time.  It is difficult to keep in mind that the area we are in this year is completely open with less shade, smaller so that teams are on top of one another, and that the ground is harder with more compact soil than takes more effort to cut through.

It is also difficult to remember that we are human too, and can only do so much in one day.  We move all the dirt we shovel and trowel by hand.  We also have to carry it further because of the small area confining the locations we can pile our cleared dirt.  We have to take frequent breaks that we see as inconveniences, just so that we can stay hydrated so we can work harder and longer, and so the indescribable Texas sun does not make us collapse in defeat.

In addition to this we are all in leadership roles because of our experience and training.  We love this, but it is yet another difficulty we face when we try to measure our success by how much area we have cleared of unknown individuals.  The more we can recover and clear, the more that have a chance at being identified.  It is so important to work slowly and methodically, and to be 100% positive that we miss no one.  If we do it may be years before we can get back to go through that section, if ever.  We consider it unacceptable.

All of these factors, and more, put a lot of additional pressures on our team.  It affects us all differently.  We have written several posts on what we think the migrants face when they arrive in Brooks County, yet we have no idea really.  What we perceive they face is probably very different than what they actually face.  That alone is difficult to absorb.  We have not really written much on ourselves.  Due to the fact we get extremely uncomfortable and awkward when speaking of ourselves, our feelings, our emotions, and our experiences.  It is hard because we just think our words simply can’t convey it adequately.

For my team, we need to remember that we have an incomparable work ethic, our motivations and drive will never fail us, and we cannot be deterred by simple frustrations, no matter how they may pile up.  We have our goals, and we will complete them because there is no other option.  We will adapt to our daily challenges and overcome every one of them because we do work so well as a unit.  Our physical and emotional capacities, while they may be strained, will also not fail us, they instead grow and strengthen with every person we meet in this journey, particularly those already mentioned throughout these blog pages.  What we have achieved so far is incredible, and we are not done yet. 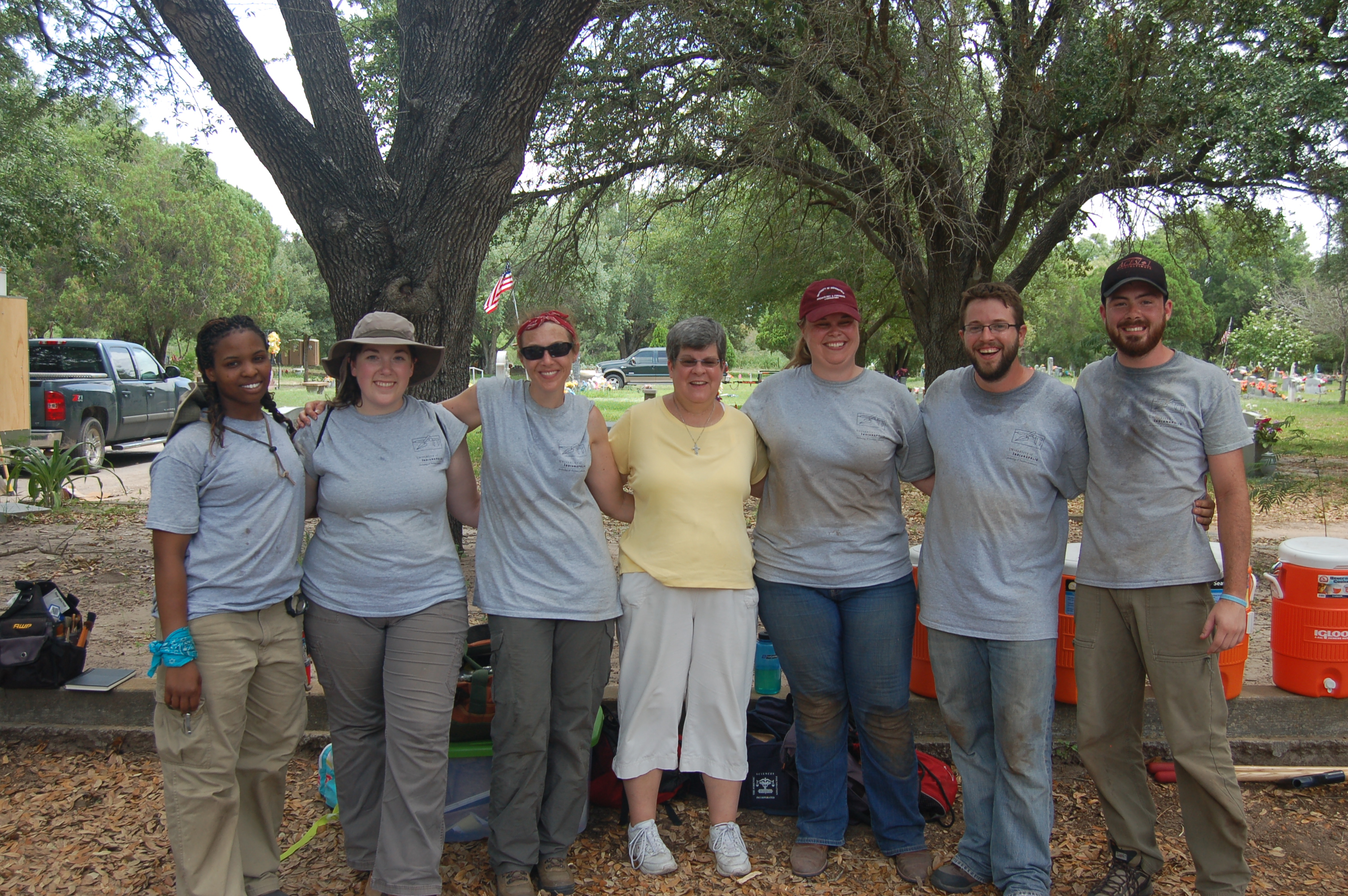 Thanks to the support from all the wonderful people we have met (and will meet) and encouraged us every day.  A special mention to Sister Pam who joined us for a couple days and has asked us questions we haven’t thought to answer since we first got involved with this crisis in Falfurrias.  She has been so moved by what we are doing she has actually reminded us of our motivations at a time when we greatly needed it.

Today was hot and challenging.  We say this every day.  Yet, after 3 straight days of the South Texas sun, today we needed a motivator.  It came at the end of the day.  Freelance writer Ananda Rose, who has been visiting for a couple days, invited a few of us to join her on a ranch visit.  We were hosted by security manager Lavoyger Durham on the El Tule Ranch, just west of Falfurrias city limits.

The 13,000 acre ranch land sees a lot of traffic.  El Tule runs right up to Highway 285, which runs East-West.  Lavoyger informed us that the migrants crossing the ranch are headed directly to the highway to catch a ride for the next leg of their trip.  The ones in Falfurrias, he said, head mostly to Houston and disperse from there. 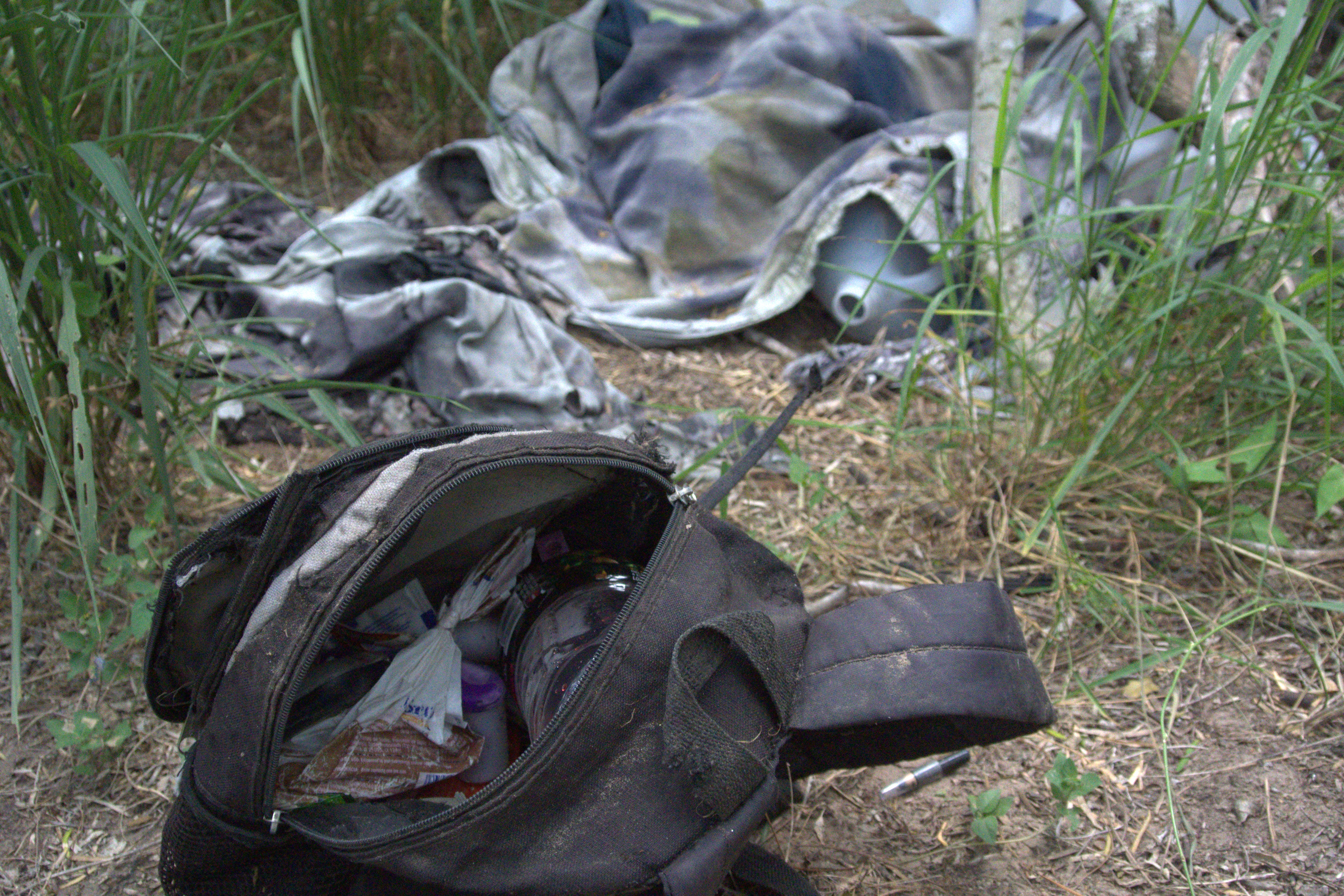 Lavoyger was also able to show us several places close to the highway that offered some sort of shelter from the sun, but the trade-off was thorny branches and mesquite so thick we could barely see each other 20 feet away.  The area was littered with backpacks, hats, blankets, jackets, and empty gallon water jugs.  It was disheartening and drove home some of what these migrants faced.

The land we were comfortable driving across was beautiful, but it was deceiving.  There were black-eyed and lazy daisies spotting the landscape, and birds soaring around.  Grass spurs, little sharp burrs that stick to and puncture all manner of clothing and skin, were unavoidable.  The sand was so deep, it was difficult to drive through let alone walk through.  And very little shade was offered by small patches of short trees and bushes that could protect one or two people. 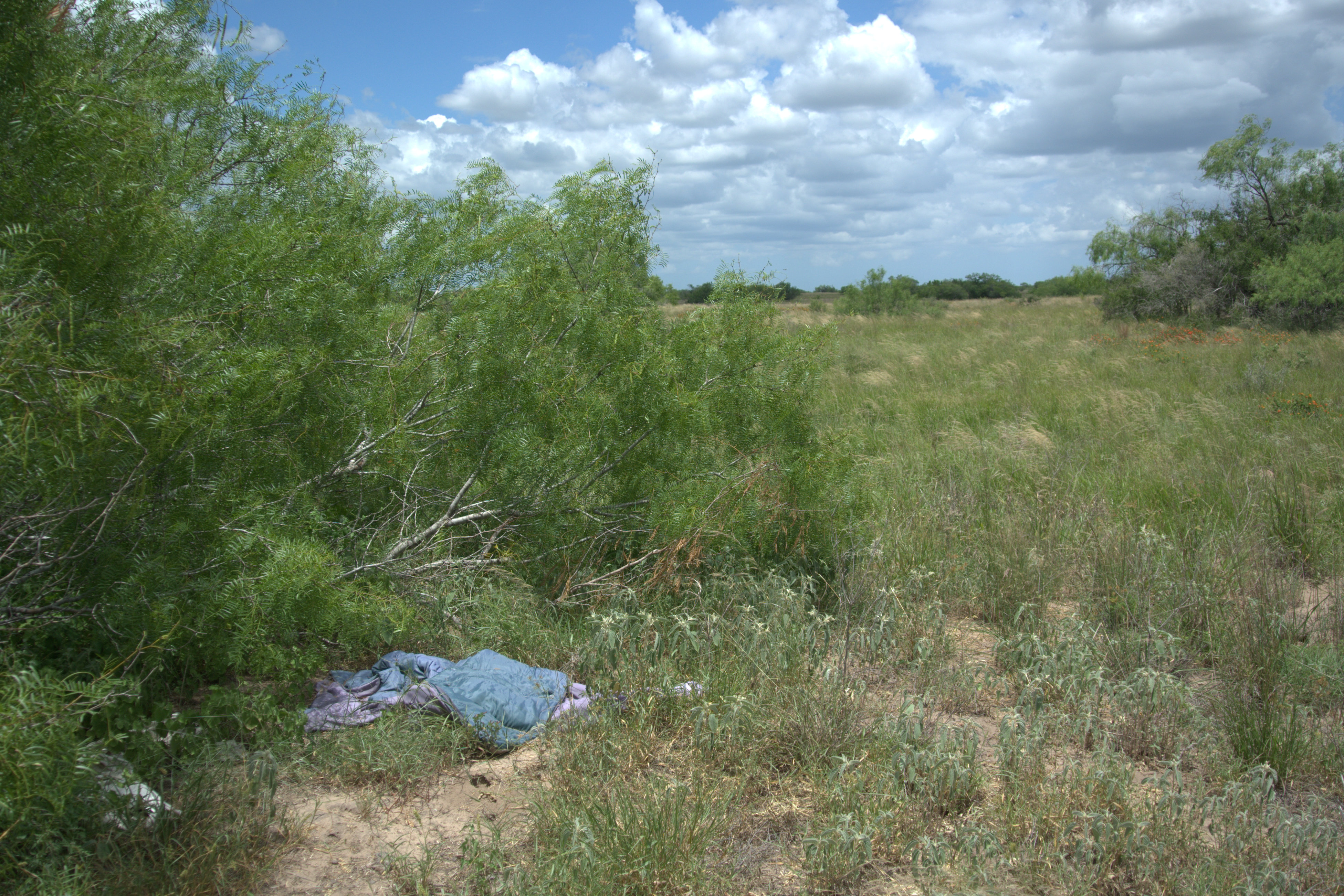 On top of the terrain and environment, we went in the early afternoon when the Texas sun was at its best and we were eager for some shade and air conditioning every time we stopped the vehicle to inspect various sites.  I can’t imagine walking in this draining heat.  I wouldn’t make it very far at all.

Next, we stopped at a handmade cross Lavoyger had put up to mark the place a migrant had died some time ago.  It was simple, merely two sticks tied together.  But it was a reminder of the value of human life.  While he was recounting the controversies surrounding migrants, he was adamant that that we are all human and the priority was always human life and preventing deaths. 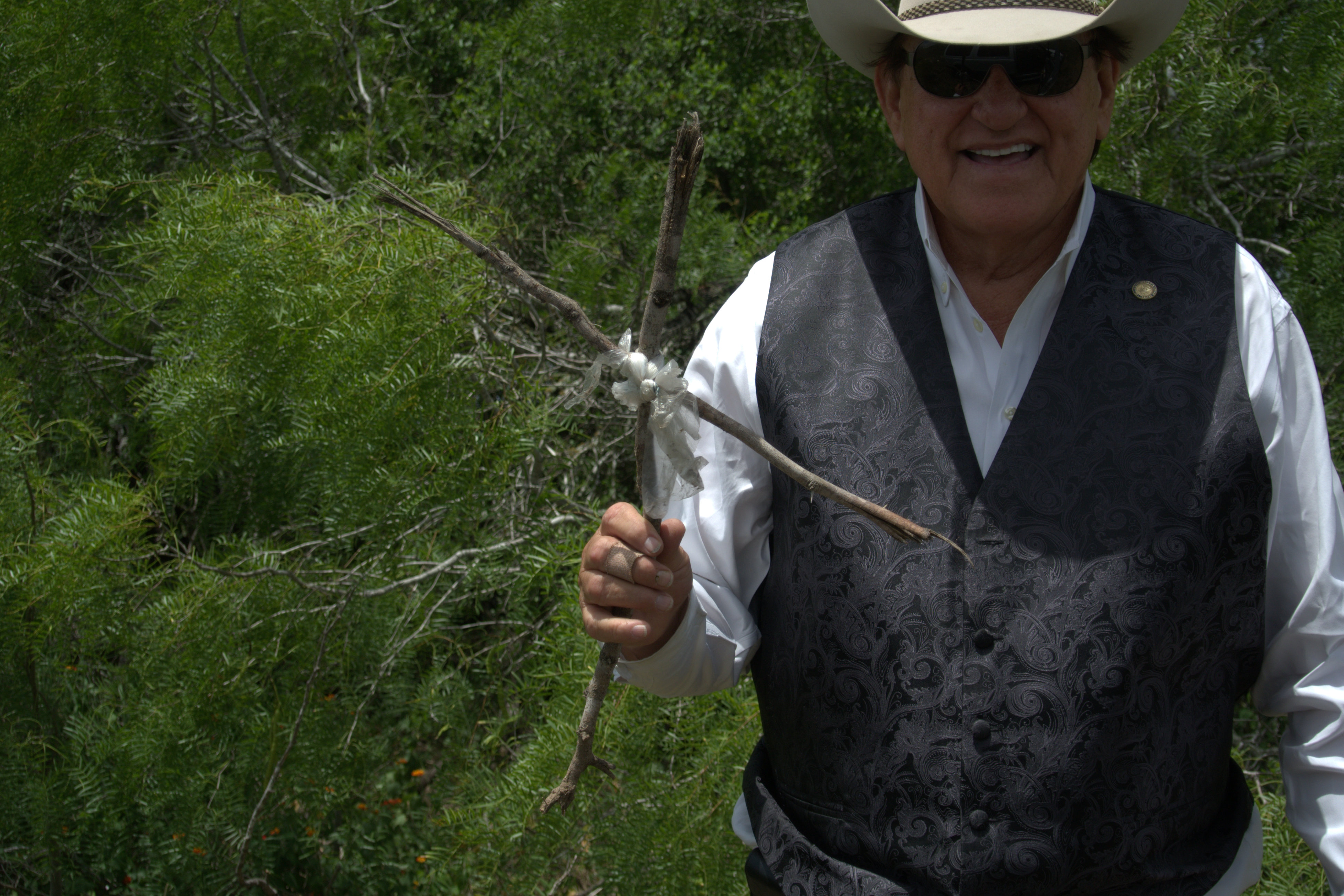 We also stopped at a water station Lavoyger had set up that was very simple.  A waving flag jutted into the sky above the trees to mark its location.  The station consisted of a 55-gallon bright blue drum with a cap on it and labeled “agua” was filled with 5 gallon water jugs purchased from the local store.  He said a couple had been taken out, but he checks it regularly to make sure there is always water available. 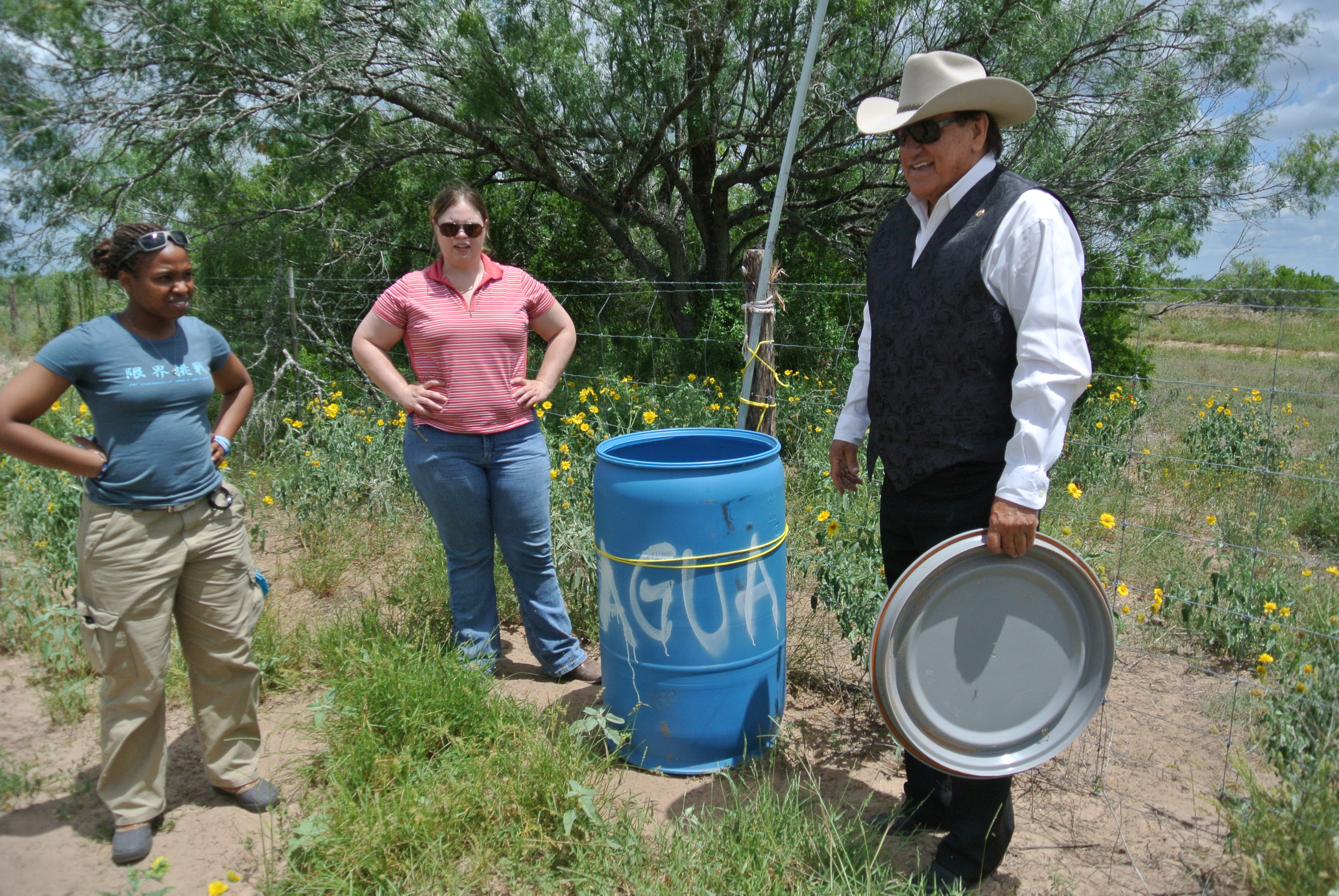 We continued to drive around the ranch, and after a short time everything looked the same.  We knew where the highway was when we could see it, but after a few turns could not point it out.  The two-lane sand roads merged and crisscrossed so I couldn’t answer if asked if we traveled the same one twice.  Without a GPS, or a knowledgeable guide, it would be extremely difficult to not walk in circles.

Lavoyger also told us a few stories of people he had come across on El Tule. He told us of the individuals he has spoken to (he’s bilingual). He has been told that migrants traveling alone are rare and do so for two main reasons: people who get left behind intentionally because they are too slow, due to heat exhaustion, injuries, age, or any other factor, and the people who escape a Border Patrol raid and wind up lost and alone (whether the only one to escape or simply unable to find the group again).

Overall, the trip to the ranch was a mix of sobering realities. It was good to step out of the cemetery for an afternoon and see this crisis from yet another viewpoint.  We normally gather information from talking to various people involved in various aspects.  This trip allowed us to see it from yet another perspective, and being scratched by sharp thorns and pulling off countless grass spurs (while uncomfortable) is only a portion of what these migrants go through, all for a better life for themselves and their families left behind.