We have officially completed 2/3’s of this years field season in south Texas and while our bodies are entirely exhausted, our team is dedicated to completing what we came here to do: recover the remains of unidentified border crossers. Today our team started out by continuing a test trench across the middle of our quadrant. Although this area had not been noted by the funeral director as absolutely containing migrants, the lack of grave markers between graves of known individuals seemed promising. After digging down as far as 125 cm in our trench without uncovering anything but more dirt, the funeral director, Arnold returned to the cemetery telling us that the area we were trenching was a much older region of the cemetery and would definitely not contain migrants. 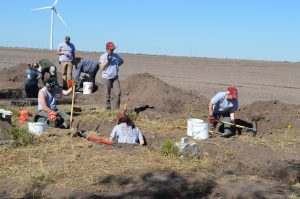 Refocusing our efforts elsewhere, we began trenching the northwestern extremity of our quadrant in areas pointed out to us by Arnold as definitely containing migrants. LOTS of dirt was moved today and unlike days prior in which multiple burials were located, just a single burial was located today. While this seems measly at first glance, making it easy to become discouraged (especially considering that today was the hottest day of the session thus far), eliminating regions of the cemetery is as important as finding bodies.

Moving so much dirt  without removal 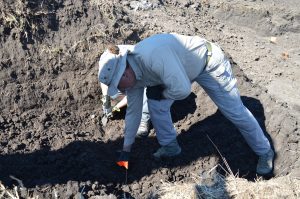 of remains to break up the monotony provided lots of time to reflect. Deputy Sheriff Don White, our hired security, decided to step in and help us move some dirt today. We were very grateful for his help and company. As he helped us work, he told us of a story that helped us remember our goals:

-The cemetery in which we are working is one of three family owned plots which have been divided over the years as one single family cemetery was broken up due to familial conflict. The owner of one neighboring cemetery visited this week and spoke with Deputy Don. This particular family member exhibited hesitance towards our work on the neighboring plot, but Deputy Don relayed the goal of our work and highlighted the efforts we are taking to maintain dignity and respect for all inhabitants of the cemetery recounting one particular case in which we went out of our way to uncover and reinter a particularly shallow grave at a greater depth. With Deputy Dons reassurance, this family member, no longer hesitant towards our efforts, left us with their blessing.